Now available in eBook, including the story “778” by Melodie Winawer!

In this anthology, USA Today, international bestselling, and award-winning authors imagine a world where anyone—rich, poor, young, old—might be well in the morning and dead by sundown.

Readers will follow in the footsteps of those who fought to rebuild shattered lives as the plague left desolation in its wake.

Nine tales bound together by humanity’s fortitude in the face of despair: a powerful collection of stories for our own time.

In dark and deadly times, love and courage shine bright. 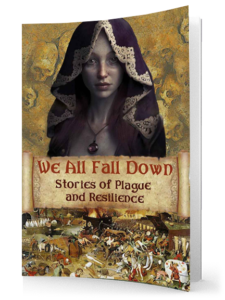 Praise for We All Fall Down

“Told with an enthralling sense of time and place, We All Fall Down – Stories of Plague and Resilience is a fascinating, if somewhat harrowing story, of nine different people as the plague touches their lives with devastating consequences. This is a novel which will resonate very much with today’s readers. The short stories in this book are richly detailed and emotionally charged … The compelling narrative captures the despair, the fear and the heartache, evokes a world where diseases were not understood, and the cures were often more brutal than the illness itself. It is a stark reminder of how fragile life is and how money does not ensure immunity.”
— Mary Ann Yarde, The Coffee Pot Book Club (read full review)

“All are set during periods of the Black Death between the 14th and 17th centuries: stories of sorrow, grief, family, love, art, beauty, and the strength to survive after immense loss.A wide-ranging, rich collection of human experiences.”
—Sarah Johnson, Reading the Past (read full review)